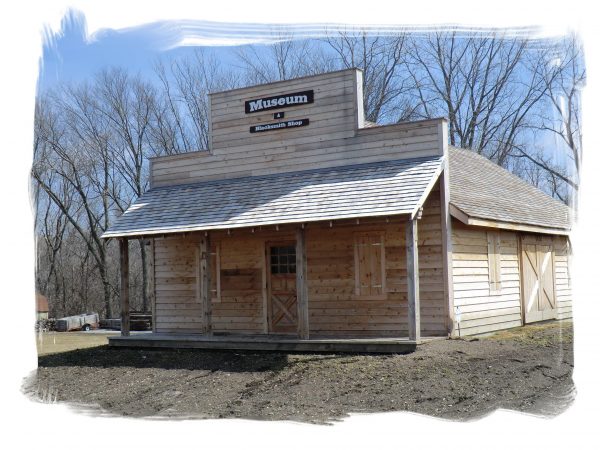 This structure is new construction using reclaimed materials. It is designed to represent a livery stable and blacksmith shop of the late 1880’s. In the right corner near the door are tools of the period including the tool chest and carpenter tools of Paul Smerchek. The long wooden bench is called a schnitzelbank or shaving horse. It is basically a vise used to hold wood while it is worked with a drawknife. Also displayed are various tools and a grind stone used to sharpen knives and tools.

In the rear corner, on a dirt floor, is the blacksmith area with a coal fired forge and anvil. Along the back wall you will see a small workbench with a “leg vise”. On the side wall we have mounted a hand operated drill press. The artifact that looks like lots of thin leather strips is a “fly shoo”. These were placed on horses to keep flies from biting.

If you look up near the center of the building you see a “hay claw”. In the days before hay baling machines every barn had one of these. They were hung from a trolley that would run the length of the building and out thru an access door. A wagon loaded with hay would park below the trolley outside the barn. The claw would be lowered, grab a quantity of hay, then be lifted and pulled to the interior of the barn where the hay would be stored. Along the north wall is a long diorama built by a Mr. Fojik. These were
donated by his son Joseph Fojik.

The buggy was found in a field near the Seven Mile Road. It was very deteriorated but was rebuilt last summer by a volunteer. This building was funded through the generosity of Royse and Barbara Myers. It was built in 2012, completed in August of that year.

The Ruud Cabin dates to about 1840 and was originally located on the west side of Hwy 31 just north of Four Mile Road. It was set back from the road and not visible since it had been encased by a more modern frame house. Its existence came to light when the Ruud family wanted to clear the property. They offered the house to the Caledonia Fire Department as a training burn down. When it was discovered that a log structure was involved plans changed. The Ruud family offered the cabin to the historical society along with the funds required for its reconstruction. The cabin was dismantled and moved to this site in 2011. Reconstruction was completed June of 2012. We are attempting to determine the original builder of the cabin.

The furnishings are not original to the cabin. The cabin has been furnished to reflect a time during the American Civil War, circa the 1860’s. We chose that era because of the newspaper remnants you see on the wall next to the fireplace. The remnants were found stuffed into a knot hole during reconstruction. It is printed in German and dated to the 1860’s.

This simple cabin would have been home to early settlers. The bed in the corner is a “rope bed”, meaning that a series of ropes strung between the rails supported the mattress. The saying “sleep tight” refers to the need to periodically tighten the ropes. The mattresses at that time would most likely have been stuffed with corn shucks. The parents would have slept in the bed. Infants would sleep near the parents and other children would have slept in the loft with a mattress, if they had one, laying on the floor.

The fireplace would provide heat and be used for cooking. One of the duties of the older children would be keeping the wood box full.