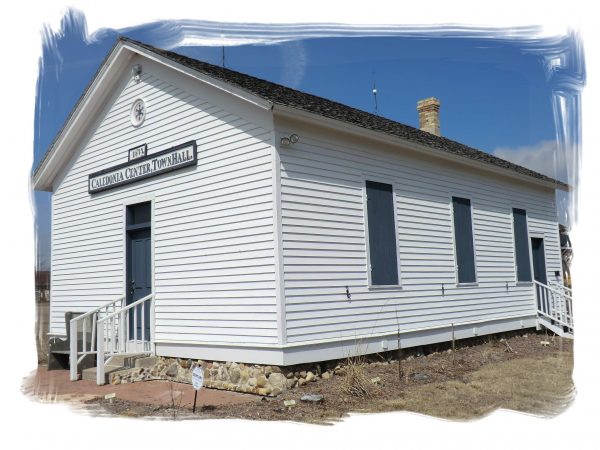 During 1876, John Fuhrman was the Town Chairman of Caledonia when the Town Board voted on a resolution to build a town hall for meetings.  The motion failed to pass, but a year later the same motion passed and the 1877 Caledonia Town Hall became a reality on the Mary O’Connor property along what is now Hwy 38 just south of 5 Mile Road.  The building served the Town of Caledonia well for 75 years.

The various displays represent aspects of town life in days gone past. In the rear right corner you see elements of home life, the treadle sewing machine, two early washing machines and hanging on the wall, three different types of wash boards along with a wooden ironing board.

In the center right wall panel, under the sign from the long gone Franksville railroad depot is a tribute to Franksville and the product that “built the town”, sauerkraut. You see a cabbage slicer and advertising memorabilia. Sauerkraut was an important staple of life. It kept for a long time, traveled well and was highly effective in combating scurvy. Countless Civil War soldiers benefited from sauerkraut.

The roll top desk was used by postmaster Ron Britton. The rack of “Indian Clubs” were used as an exercise routine by early Czech settlers who formed societies called “Sokols”. These societies promoted physical fitness and fraternalism.

The coal stove and table are similar to what would have been in the building in 1877. The town fathers sat at the table while interested citizens sat along the wall on the benches.

On the wall you will see the original blueprint for the Linwood School. The original Linwood School stood just across Five Mile road. The school would eventually burn to the ground. This park is named after that school. The school was rebuilt on Hwy 38 near the Six Mile road. It still is in use by the Caledonia Lions Club. The desks are of various periods ranging from circa 1900 to 1950. There are also displayed several photographs of students at the Linwood School. 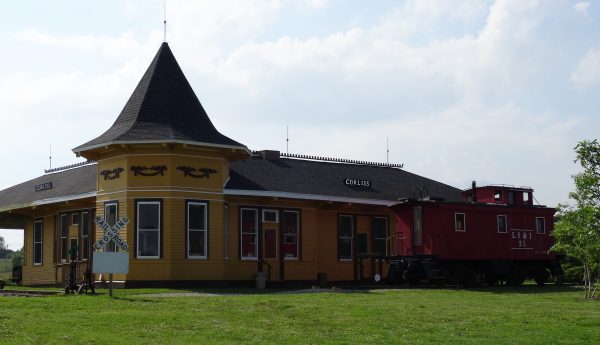 Welcome to the 1902 Milwaukee Road Depot.

The story of the depot actually began a half century before it was built.  The mid-nineteenth century saw a tremendous boom in the railroad industry.  Hundreds of new railroads were planned by optimistic entrepreneurs seeking their fortunes by opening new markets for their goods, (or by becoming railroad builders).  In 1852 the Racine, Janesville & Mississippi RR. was chartered to connect the port of Racine to the great shipping corridor of the Mississippi River.  A few years earlier, in 1847, another enterprise, the Milwaukee & Waukesha RR. had also been organized, at first to link the named cities, but plans quickly changed to also build to the Mississippi.

By 1872, after a series of expansions and acquisitions the R.J.& M. had become the Western Union RR. and ran to Savanna, Illinois.  The M. & W. RR. had become the Milwaukee & St. Paul RR. and had acquired the W.U.RR. in 1869.  The M. & St. P. had built tracks to Chicago which crossed the W.U.RR. at the village of Parkersville seven miles west of Racine. The railroad called  the crossing Western Union Junction and from 1876-1901 that became the post office name for the village as well.  The first depot at the location was reported to have been a re-purposed boxcar, but at some point a depot and freight house had been built which was destroyed by fire in 1883.

The replacement structure lasted only until 1901 when it also was consumed by fire.  That same year saw the relocation of the Brown Corliss Engine Company, a producer of steam engines, from Milwaukee to Western Union.  To honor the new industry, the village name was changed to Corliss and the new depot structure bore that name when finished in 1902.  The new station was built as an “L”-shaped structure and featured a Victorian-inspired octagonal turret allowing the stationmaster to view the tracks in all directions. The perimeter windows gave view of both roadbeds.

Corliss Engine went bankrupt in 1907 and the factory was empty until 1923 when  the B. F. Sturtevant Company of Boston, Massachusetts bought their assets.  On October 2, 1923, the village was renamed Sturtevant, as we know it today. The east–west line ceased operation years before but the depot continued servicing the north–south line until the new Amtrak depot on Highway 20 replaced it in 2006.

Ultimately, the Canadian Pacific Railroad owned the depot and planned to demolish the aging structure. The Western Union Junction Railroad Club wanted to save the depot, but lacked the funding to preserve the deteriorating building. The Caledonia Historical Society purchased the depot and began readying it for a move. Heritage Movers initially cut the building into three sections, each 32 feet wide, 40 feet long and 25 feet tall. The movers later removed the roof and turret to accommodate utility lines for the trip.

After getting approval on a route to relocate the structure at the Caledonia Historical Village, four trailers carrying the depot began the 4 mph journey at one minute after midnight on Monday October 26, 2009 and completed the trek about 3:45 a.m.

Renovation of the depot took almost three years of effort by members of the Society. It including the help of work release inmates from Racine Correctional and engaging a Hawaiian designer to create templates for the scrollwork on the outside. The newly renovated Milwaukee Road Depot opened to the public in 2012.

The stationmaster’s section of the depot contains his original desk with chair and typical communication devices such as a telegraph key and a scissors telephone. Train order hoops (forks) used to “hand up” running orders to the Engineer in the engine and the conductor in the caboose as the train zips by the station hang on the wall in the turret.

A model railroad layout in the men’s area often draws the delight of our younger and young at heart guests. The stairs alongside the layout lead to what was the freight room. A sliding door opens to a loading dock at the level of freight cars. The freight area, currently used as a workroom, will become a learning center.

A 1927 Lake Superior and Ishpeming caboose sits alongside the depot. Moved from a location on Four Mile Road, the restored caboose offers a taste of what “riding the rails” was like.